Horse-drawn living waggons have been in use for at least two hundred years and the best were built in Victorian England.
The people of the roads called their home their waggon, van or vardo, but house-dwellers called it a Gypsy caravan. It was the Gypsy's most valued possession.
This house on wheels is brightly painted, often decorated with real gold leaf, has a double bed, cupboards, a small stove and a chimney and a rack and pan-box at the rear. The whole sufficiently light in weight to be drawn by one horse.
Many years ago there were hundreds of them on the roads of the British Isles, but many modern time rules and regulations - some being rather unfair, have made travelling life very difficult. Only very few travelling people still live in their horse-drawn caravans, most have gone over to trucks and trailers or became house-dwellers. Once buying and selling horses, they now have picked up the trade of car mechanics and scrap metal merchants.
There are several types of Gypsy caravans, and our caravan is a Bow Top: it has a round canvas top on a bowed wood frame. The shape of our roof is not totally round, but more like a horseshoe. Bow Top caravans combine elegance with lightness, durability and a low centre of gravity, so it is not likely to overturn. Its green sheet of canvas blends nicely with the hedgerows and because there are no side windows, you hardly notice it at night. Travelling people were often chased away when noticed, so that's why this type of caravan was rather popular with the Gypsies.
Gypsies did not build their own waggons but bought them from 'a gorgio, or gaujo' waggon-builder. It needs many skills to build a good waggon, a place to build it, investment in tools and timber. Thus a settled way of life - anathema to the Gypsy of those days.

You can still find Gypsy caravans for sale but advertisements offering Gypsy caravans for sale over a 100 years old, should be treated with reserve. They were not built of hard, century lasting timbers. and often suffered rough treatment and neglect. They rotted away, were badly painted over and some of them were burned ritually when their owner died.
A reliable adress if you want to buy an authentic Gypsy caravan is: www.gypsy-caravans.co.uk 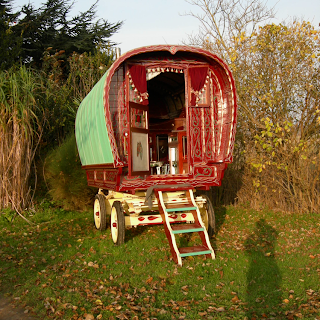