A house for the kestrel
I already told you we have extremely nice neighbours, and last week two of them helped me to put up a nesting house for the kestrel ( falco tinnunculus). Well, one of them had a nesting house, and the other came to put it up.
It all started while discussing kestrels with my neighbour Søren last summer, and he mentioned he could put up a nesting house for them at my place.
Søren has a nesting house himself and last summer 'his' kestrels raised 6 healthy youngsters. Which is very special as kestrels normally only have 3-6 eggs.
Kestrels are rather small birds, 31-37 cm and they are common around here, most days you can see them 'praying' above our field, hunting mice.
So late summer, neighbour Søren came to inspect my place, looking for the best possible place to put this nesting house up. Summer became autumn, autumn became winter, and by the time I had completely forgotten about this nesting house, Søren was back with a very nice nesting house, which our neighbour Carsten ( yes, you have already read about him) did not use. Carsten had made two nesting houses for kestrels, but had only put one up, so he gave us the other one.
It was not easily done, it is a heavy nesting house, and it was a very cold morning. And I have to admit that Søren did all the hard work while I was just holding the ladder and forwarding the screwdriver....
But the result is great, I can watch the nesting house from my own window all the time. 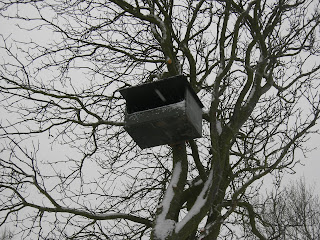