The cat that found us

We always have had cats throughout my life, but after the last one died at the age of 19, I did not want a new one.
But one day early September last year while walking around my neighbours Xmas trees with visiting friends, a tiny little cat ran after us, wailing dramatically. I had never seen such a meagre cat. It was just fur and bones.
But it did not give up, and kept on running after us all the time. We tried to ignore it, as no, I did not want another cat. But every time we stopped it just grabbed our legs and held tight.
Of course we gave in and took it home. It was so hungry it even started sucking my daughters clothes. We fed it small bits and within a couple of days it had recovered from its ordeal: we by then heard about some people from a nearby village that had left a cardboard box with unwanted kittens near a farm close to ours. People like that are cruel cowards, as no farmer wants more cats, they have loads of them already, and who knows what became of the rest of these poor kittens. This one was very lucky, and that is what he thinks himself as well, he really is a character. A little Moghul prince.
And he even got a Kashmiri name: Pamposh, meaning 'Lotus'. 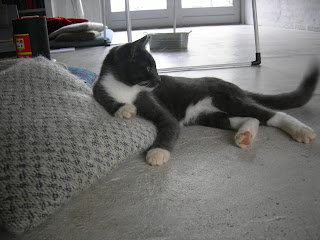