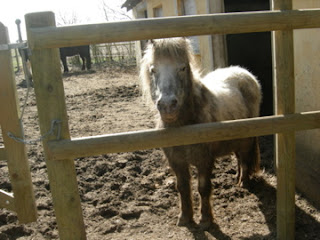 We have four horses at the moment, well, if you consider horse number 4 a horse: she is just 80 cm. high and is my daughter's first pony. We bought her when my daughter was one and a half year old and used her mostly as a buggy. Easy transport in the woods. She is called Pixie, 19 years old, and an appaloosa mini pony. An appaloosa is a spotted horse, the equine counterpart af the spotted Dalmation dog. Pixie was born in Devon, Great Britain and came to Holland as a two-year-old. She moved with us to Denmark. 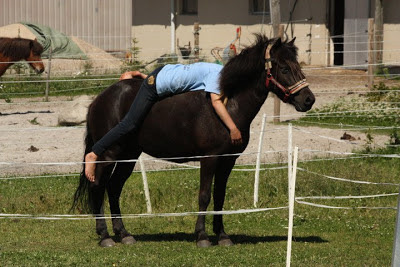 We lived in Holland before and there we bred Icelandic horses and rode international competitions with them. Now, we only have one Icelandic mare that moved with us to Denmark. She is called Ykja, and a very friendly, small black mare. She is five-gaited, which means that she can walk, trot and canter like any other horse and has tölt and pace as extra gaits. Tölt has a clear four-time rhythm, the horse moves one leg at a time. The head and neck of the horse are held high and the horse has a high action in the front legs. A very comfortable gait. Pace is a two-beat lateral gait with suspension, performed in two-time and at high speed. Like the overdrive of a car. 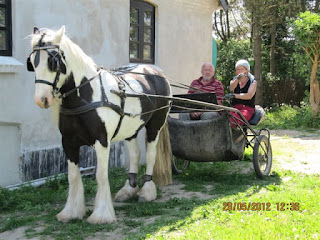 And then there is Shanty, our big friendly tinker horse. Black and white with a lot of manes and long socks. We bought her because we needed a horse to pull our gypsy caravan, as tinker horses have done  for hundreds of years. They were and still are, the favourite horses of the travelling people in Great Britain. These people earned some money by mending pots and pans - they were tinsmiths, or tinkers and so their horses were called 'tinker horses'.
If ever you want to see a whole lot of these beautiful strong horses - and their intriguing owners -, you should go to Appleby Fair in June, the annual gathering of travelling people in the North of England.
In 2003 we spent two weeks in Ireland, travelling around in a horse-drawn caravan, and once smitten, we bought a gypsy caravan ourself in 2006. In Devon.....  And we have many happy memories travelling with it in Holland. With Shanty, of course.
The gypsy caravan moved with us to Denmark, and we use it in the summer as an extra bed for children staying at our B&B.
We train Shanty with our sulky, do a lot of driving on busy roads, so she won't loose the feel for the traffic, and we usually take one of our guests along. It is such fun to drive this lovely horse. Last summer I drove a lot through the sea as well, great fun, but a lot of rust on your wheels....

And last, but not least, there is my daughter's new horse, a real mustang. Born in Denmark, but both its parents were born in the wild in Oregon and then caught, trained and sold to Denmark.
He is called Lightning, four years old, and he has a lot of energy. We just started training him and my daughter trains him to be a western horse, so we take him to clinics with real cowboys from the USA. 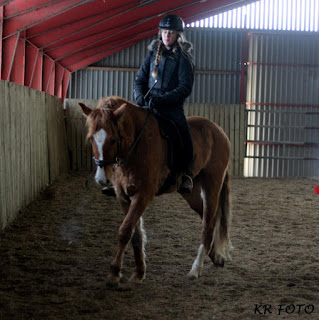 Mustangs are the descendants of the horses the Spanish brought over to America after Columbus. They escaped, or were turned loose, and lived in freedom for hundreds of years. So, they are very clever and independent horses. The Native American people used to select their riding horses from these wild herds, and when the big ranches needed more land for their cows, mustangs were threatened with extinction. Nowadays they are protected and every year there is a number of mustangs for sale.