Sea eagles
Not far from Bøjden Cottage, in the woods around the lake called Brændegaard Sø, a pair of sea eagles nests and if you are lucky, you can see them foraging on the waterfowl of this lake. So we usually take our guests down there and this year most of them were lucky enough to see them. In late autumn we even saw their young: three eagles in a tree on the lookout for some snacks.
The friend visiting us in January, was not so lucky - at first. It was a cold and grey day, not many birds on the water, and certainly no sea eagles.
But as the Native Americans say: don't go looking for things, if you turn your back, it will find you...
The following morning, while sitting by the fireside and drinking our morning coffee, we spotted a very large bird flying above my field: an eagle! Yes, there were even two. One was hunting low over the water, the other one landed in a tree at the bird reserve. The treetop was bending under its weight as he (or she) sat there as a big fat turkey. Sea eagles have an incredible size and their wingspan can be more than 2 metres. They are the largest European eagles. It was just incredible.
The next day we went shopping in Faaborg and on our way back we took a scenic route. And there we saw an eagle again, gently drifting above the hill. Three eagles in two days.... and it even got better:
The following day we drove to Helnæs on the other side of the bay. Near Brunshuse we spotted an eagle. He landed and was pecking at something while we watched him from our car until he spread his wings again and flew away. Four eagles in three days.... We drove home happily and when turning into my driveway an hour later, we saw our fifth! Soaring low over my field, incredibly low over my car and down he went to the bird reserve. But maybe it was the same eagle, being very annoyed with this red car following him everywhere.
The picture below was taken autumn 2012 at Brændegaard Sø by German birdwatchers who kindly sent it to us. 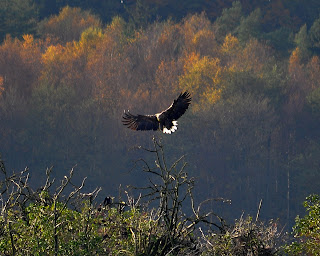